Legend has it that my Mom’s favorite cake growing up was German Chocolate Cake. Nana (you remember Nana, right?) would make it for her birthday every year! The last time I was at home I snapped a photo of the recipe card for Nana’s German Chocolate Cake and decided to turn them into adorable little cupcakes for Mother’s Day!

I was prepared for a tasty cake, but I was not prepared for one of the best chocolate cupcakes that I have ever had! These were EPIC.

The German Chocolate Ganache just took them over the edge of bliss! I actually ate so much of the ganache (on a spoon) that I almost didn’t have enough to fill all the cupcakes! For shame!

The cake is perfectly moist and light; the ganache filling is not too sweet, and the pecan, coconut topping is sweet, creamy and flavorful! All the flavors perfectly blend into one sensational German chocolate cupcake!

Worthy of fêting even the most outstanding of mothers!

Indulge me in a small simile. These cupcakes are like my mother: beautiful and sweet on the outside but with even more to discover on the inside!

I feel compelled to tell you that German Chocolate is not actually chocolate from Germany, but rather the semisweet, dark chocolate creation of an American named Sam German! He developed the chocolate for Baker’s Chocolate Company, which was used by a Texan to create the original recipe for German Chocolate Cake in 1957.

Nana’s recipe is nearly identical to the original (on the box of Baker’s chocolate) except hers calls for cake flour and she adds buttermilk. I have a feeling that this buttermilk is the secret to a tender, moist German Chocolate Cupcake, because every other one I have ever tried has been tragically dry.

I have only one recommendation other than to make these tomorrow: if you aren’t going to photograph your cupcakes, I would use half the amount of topping you see pictured. It was really too much, but I wanted them to be pretty!

And let’s be honest, a mound of frosting is just so more beautiful than a shmear.

So these German Chocolate Cupcakes are for you, Mom! Happy Mother’s Day!!!

And Happy Mother’s Day to all the other lovely mothers out there {including you Nana!}! 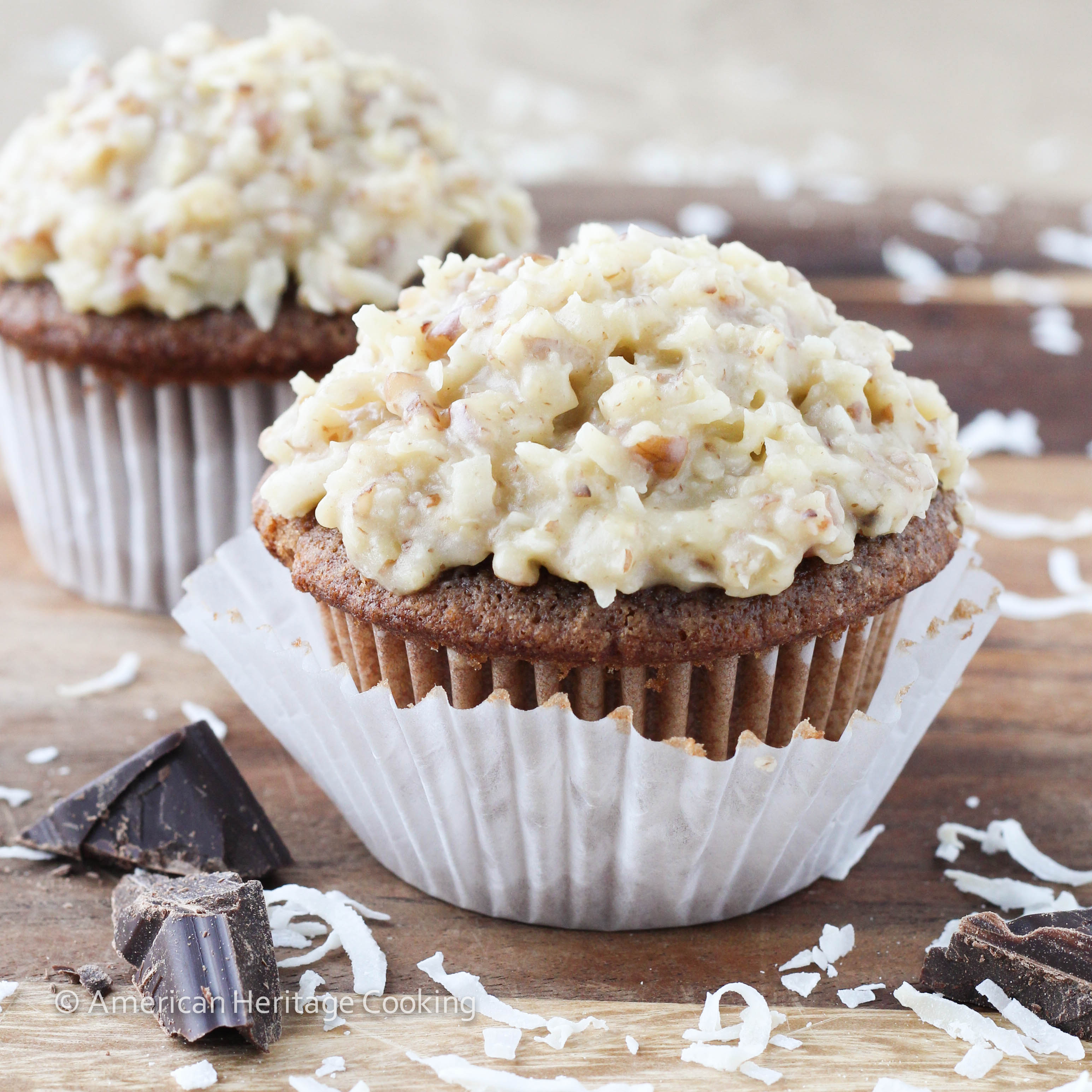 My Grandmother's German Chocolate Cake recipe turned into phenomenal cupcakes! The cake is perfectly moist and light; the ganache filling is not too sweet, and the pecan, coconut topping is sweet, creamy and flavorful! All the flavors perfectly blend into one sensational German chocolate cupcake!

For the Cake:
For the Coconut Pecan Frosting:
For the Ganache:

Freezing: I have successfully frozen the final cupcake product, wrapped individually in plastic wrap and then packaged in groups of 6 in wax paper all delicately placed into a zip-top freezer bag. Thaw cupcakes on the counter or zap in the microwave for 20 seconds on 50% power. The frosting will remain very thick even when fully thawed but they still tasted delicious! If you are planning on freezing them, then you should definitely double up on the cupcake wrapper.

3.1
https://cheflindseyfarr.com/2014/05/german-chocolate-cupcakes-ganache/
All images and content are copyright protected. Please do not use my images without prior permission. If you want to republish this recipe, please re-write the recipe in your own words, or link back to this post for the recipe. Thanks!

I’m overjoyed that you’ve stopped by! I’m an executive pastry chef in New York City, and this is where I get to share my love of cooking and baking with you!

Be the first to receive my latest recipes and video tutorials!

Brown Sugar Meatloaf – Not your Grandma’s Meatloaf, but just as amazing!

This budino makes her debut tomorrow when @peasant

You know I couldn’t leave you hanging for #vday

SOLD OUT!! Thank you to everyone who ordered and s

Monday is the LAST DAY FOR FREE SHIPPING! The Supe

This hot cocoa is a game-changer: rich & decadent