These Vanilla Bean Marshmallows are light and fluffy with the perfect vanilla flavor! Hot Cocoa and Smore's will never be the same!

Full disclosure: I have not always loved marshmallows.

I know, I know. This is shocking news, but try to contain your disappointment and overwhelming questions and hear me out.

The texture. It creeped me out as a kid. Squishy, super sweet and kinda bland. Marshmallows were completely acceptable in Smore’s (I’m American, so this is a given), but beyond your scorched campfire ‘mallow, you could count me out. I didn't understand until I tried my first homemade vanilla bean marshmallow made with egg whites.

I was a line cook and the kitchen was burning hot. It was the kind of hot that made the thought of real food completely unappealing; the kind of hot where you could not physically drink enough water to stay hydrated. I ran off the line to grab more chicken and steaks, and, as I breezed past the pastry station, I grabbed a pro-offered marshmallow scrap without thinking. I popped it in my mouth and as it melted, I thought, “oh damn, that’s good.”

Back to the vanilla bean marshmallows!

These are the very marshmallows that I make at the restaurant. Real vanilla bean seeds and pure vanilla extract give it the flavor, but the real game-changer is the texture of marshmallows made with egg whites. They are pillowy soft and they melt in your mouth.

These are the marshmallows that are featured in my current hot cocoa obsession. I will switch to oat milk to shave calories off my favorite treat, but I WILL NOT eliminate these vanilla bean marshmallows. They bring me happiness which is a treat all by itself ?

You do not have to make as large a batch as I did. You can easily halve the recipe and have a more manageable amount of marshmallows. Not that I am complaining ?

If you are skeptical of the egg whites or you just don’t have them on hand, you can make these marshmallows. They don’t use eggs and they are also AH-mazing. 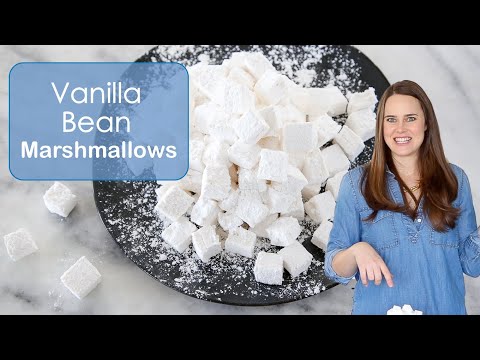 Store in an airtight container away from heat and humidity. Never refrigerate or freeze. Yield: 100 marshmallows
Keyword how to make marshmallows from scratch, marshmallows with egg whites, vanilla bean marshmallow recipe
Tried this recipe?Mention @cheflindseyfarr