These Caramel Apple Cupcakes are a moist cinnamon cake filled with a spiced apple compote and are frosted with an easy salted caramel buttercream!

I cannot tell you the last time I actually had a true caramel apple. This is for two reasons:

Why cover an entire apple in caramel and then cut it up when you can cut up an apple and then dip each slice in caramel, thus sparing yourself caramel between the teeth and feeling justified in increasing the caramel to apple ratio? {Was that sentence long or what?!}

Or skip all that nonsense and eat a Caramel Apple Cupcakes!

The cake is moist and dense with a very large crumb. They kind of melt in your mouth they are so soft. Buttermilk has a way of doing this. If they sound familiar it’s because they are a slight modification of my Sprinkles Copycat Triple Cinnamon Cupcakes.

It’s all the flavors of a caramel apple without the messy eating process.

For the Cinnamon Sugar:

For the Apple Compote: 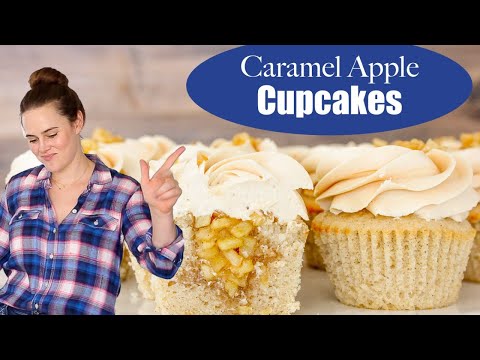 The recipe for the Salted Caramel used in the frosting can be found here Updated Recipe: In October 2020 I changed the butter from melted to softened because it makes a lighter, softer cake that is slightly less dense. I prefer this method but if you loved the original more dense cupcake, then just melt the butter Yield: This recipe makes a baker’s dozen.
Keyword Fall, granny smith apples, holiday desserts, thanksgiving, winter
Tried this recipe?Mention @cheflindseyfarr