This Cinnamon Apple Pie has a brown sugar cinnamon apple filling baked to perfection inside a flakey all-butter pie crust!

If you follow me on the Gram you already know that I broke my toe a few weeks ago. I stubbornly believed that it couldn’t be broken if I didn’t go to the doctor. So I limped around on a broken foot for 2 whole weeks before I had to admit that the level of pain wasn’t normal.

I also filmed this cinnamon apple pie video on said broken foot. Blame my Dad’s tough lessons growing up or years working on the hotline with a bunch of rough-around-the-edges men, but I believe in being stronger than the pain.

Also, no pain is going to keep me from apple pie! And that is the truth.

I’d like to think that the perfect bite of apple pie would cure just about anything. Except a broken toe. Trust me, I tried! ?

I like a balance of sweet and tart (and sometime salty) in my desserts. If a dessert is so sweet that you can only eat two bites, then it is too damn sweet. With that in mind I chose moderately tart apples (Braeburn, pink lady, Cortland, Macoun, and Ginger Gold), tossed them in granulated and brown sugar, and balanced the sweetness with lemon juice.

Lemon zest adds a nice floral dimension plus you already have the lemons for juice! The cinnamon just makes it a party.

I used my latest pie crust obsession but you could also use this all-butter recipe or this one. I have all the pie crust tutorials you could ever need on YouTube because I believe a flaky pie crust is in everyone’s wheelhouse. [That is such a strange expression, no? ?]

You’ve got this! I made it with a broken toe after all! 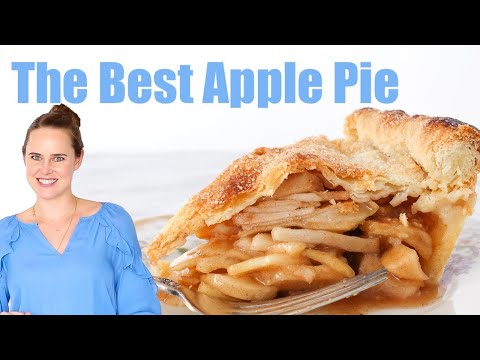