This Caramel Swiss Meringue Buttercream is incredibly easy to make, perfectly sweetened, and has a light, silky texture. It is the perfect topping for cakes or cupcakes! Its silky texture makes it the best frosting to achieve that perfectly smooth coating on a layer cake.

I am generally a card-carrying member of the Italian Meringue Buttercream Club, but IMB can be a bit tricky with the timing of the meringue and the sugar syrup, and the temperature of the butter. When I’m feeling pressed for time, I will lean on my old friend Swiss Meringue Buttercream (SMB).

She is steadfast and stable: the buttercream version of the best friend who always has your back and will pick up your call no matter the time!

This SMB is the perfect amount of sweetness and is light and silky. It almost melts in your mouth! I have flavored mine with my caramel sauce, specifically the wet caramel sauce in this video, but it would work with either! You can also flavor it with vanilla extract and beans, lemon curd, melted chocolate, berry jam or any number of extracts. It really is the perfect base for any flavor!

What are the benefits of Caramel SMB?

So glad you asked, my inner pastry nerd could hardly contain herself!

Ultimately it’s all about you! You can watch my YouTube tutorial on IMB and then decide, which buttercream speaks to you. 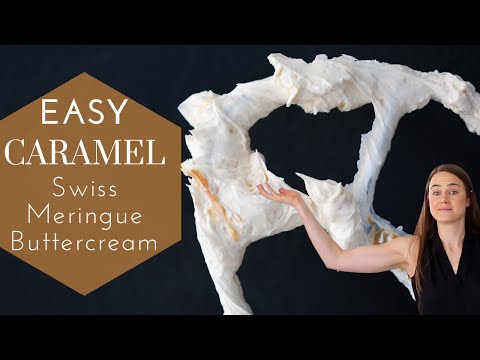 Yield: 1 ½ Quarts You can make a larger batch and then keep it in the refrigerator (or freezer) to bring out when you need it!
Keyword buttercream, caramel buttercream, swiss meringue
Tried this recipe?Mention @cheflindseyfarr