This Krispy Kreme Doughnut Copycat recipe makes doughnuts that are light and airy! Little fried pillows that melt in your mouth!

Like I was telling you in my recent Classic Donut Glaze post, I developed more donut recipes than is altogether normal. These Krispy Kreme donuts were one of the recipes that was constantly under development.

Every now and again I would revisit the last iteration and tweak it. I had been testing it for over a year before it made it to being the Donut of the Day. Even my current recipe still says “Work in Progress,” because I am still improving. That is not to say that it isn’t a phenomenal copycat! Because it is!

This is not a beginner’s dough. That doesn’t mean you should shy away from attempting it. Just don’t get frustrated. Be patient with yourself and the dough. Accept that she is going to be sticky and not form a smooth dough. Accept and then work with her.

I highly suggest you watch my video on making it because nothing beats showing someone how to handle a yeasted dough.

Why these are the BEST Krispy Kreme Doughnut Copycat:

Gluten: Controlling the gluten development is part of what makes this doughnut so light and airy. The first step is using a combination of cake flour and all-purpose flour, which controls how much gluten is available from the get-go. The second step is controlling how much gluten is activated. This is mostly done by working with it gently. Gently rolling out the dough and gently handling will keep the donuts tender.

Moisture: A high moisture content will also add to the light texture of these donuts. It also adds to the challenge of working with the dough. Resist the temptation to add more flour to make it more easily workable. Spray your hands and tools with nonstick spray instead!

Enrichment: This dough is highly enriched. There is butter, oil, milk, and eggs in it! All of these additions add flavor (hey? welcome!) and fat. This will add to a soft, moist and tender dough. The fat also hinders gluten development, which makes it harder for the included gluten to form tight strands.

Sugar: Technically this is also an enrichment, but there is such a significant amount of it, that I wanted to highlight it separately. Sugar is there for flavor but also to hinder gluten development. I know! It’s a theme! 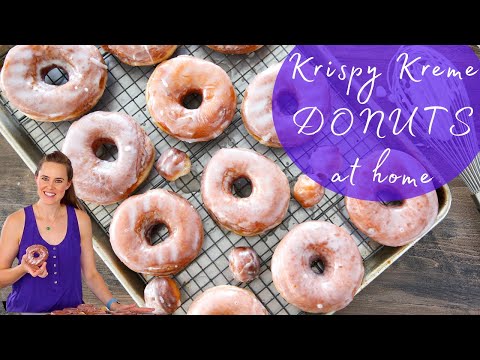 Can re-roll scraps one time with at least 20 minutes of bench rest. Knead the scraps together into a ball, cover with plastic wrap and allow to sit 20 minutes before trying to roll them out again. If they shrink back, give them a little more time to rest! For the most authentic taste, fry in shortening. I used canola oil, but they still taste soooo close!
Keyword breakfast pastry, copycat, donuts, doughnuts, yeasted donuts
Tried this recipe?Mention @cheflindseyfarr