This Vegan Gluten Free Chocolate Chip Banana Bread is incredibly moist with a soft, tender texture. Look no further for the perfect gluten free banana bread! It uses buckwheat flour, which gives it almost a nutty flavor and irresistible texture.

Listen, if you know me IRL, then you are probably a little shocked by this post, but a pregnant woman’s cravings are not to be reckoned with. And I have been craving buckwheat banana bread like you would not believe. I LOVE all banana bread, which you can tell based on the volume of banana bread recipes that I’ve posted on CLF.

I love Old Fashioned Banana Bread with a hint of lemon zest, Nutella swirled banana bread, pumpkin banana bread or even peanut butter banana muffins. No need for me to make a distinction. However, let me tell you, this vegan gluten free chocolate chip banana bread is going to change your life!

Why is this the best ever vegan gluten free banana bread?

Why is my gluten free banana bread gummy?

Generally speaking gluten free banana bread will be gummy with too much moisture or too much banana. It sounds counterintuitive but that mashed banana we adore, who is the star of this show, can make the texture gummy.

Why is my gluten free banana bread gritty?

This is 100% the fault of rice flour or the rice flour that is in your Gluten Free All Purpose flour. All brands have a different proprietary mixture and some include more rice flour than others. Take a little peak at the ingredients and see where one the list rice flour falls. Or just make this Vegan Gluten Free Chocolate Chip Banana Bread instead and use buckwheat and spelt flours instead!

Why is my vegan banana bread dense?

The most common two reasons vegan banana bread is dense is there is too much liquid or not enough leavening. Too much banana can also be the culprit. Don’t forget that bananas vary greatly in size, so 1 banana might be the equivalent of 2! It is best to mash them and then measure or weigh.

Always measure or weigh your mashed bananas because every banana is different and some are double the size of others! Too much mashed banana will cause the texture to be dense and gummy. 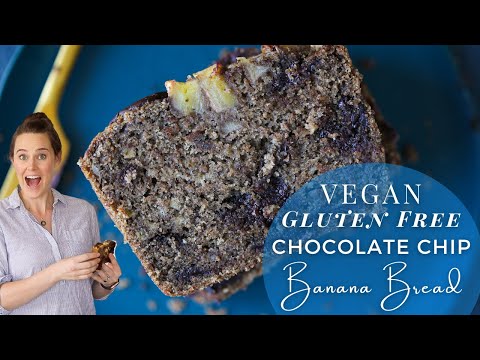 Check out all our delicious, pastry chef-created recipes for Breakfast!