These are my Great-Grandmother’s Pecan Tassies. This pecan tassie recipe tastes like miniature pecan pies and are completely addicting! The cream cheese crust presses easily into mini muffin tins and then bakes into a soft, flaky crust!

My great-grandmother Rosa, also known as RoRo, was a feeder. You know what I'm talking about -- there is one in every family. In addition to making a huge feast whenever family came to visit her, RoRo would bake up dozens of everyone’s favorite treats to send home with them. She baked Old Fashioned Peanut Butter Cookies for my dad and date pinwheels for my mom. But these Pecan Tassies were just for me. {It's no surprise that I grew up with a great love of pecan pie, and we even sell pecan pies in my shop all year round!}

I would eat some tassies in the car on the way back to my grandparents’; I would eat some on the plane home; and I would eat some straight from the freezer at home. I can tell you from personal experience that they taste amazing frozen, so don't think you'll just pop half in the freezer for a later date because the freezer is no deterrent! These make a great addition to a Christmas cookie platter or box, but they are just as good all year round!

What are Pecan Tassies?

Pecan Tassies are miniature pecan pies baked in mini muffin tins. They have a sweet pecan filling and a tangy cream cheese crust. The crust is pressed into the tins for an easy, rustic cookie. This particular pecan tassie recipe is from my Great-Grandmother!

Why do my pecan tassies stick to the pan?

Pecan tassies stick to the pan if they are even slightly overfilled or if the crust was pressed too thin. Usually you can still remove them by sliding a paring knife around the edges and then twisting. If not, that one is yours! I call those the Chef’s bonus.

How do you get pecan tassies out of the pan?

Properly filled pecan tassies will just twist out of the pan. I find it easier to remove them when cooled to room temperature because the crust is a little more stable and less likely to crumble. If they are over-filled or the crust was pressed too thin and some filling leaked out, you can run a paring knife around the edges to loosen. Twist out or use a small offset spatula to pry them out!

How do you store pecan tassies?

You can store my Great-Grandmother's pecan tassies in an airtight container layered between parchment or wax paper. They store well at room temperature, in the refrigerator or frozen for longer term storage.

How long will pecan tassies keep?

These cookies will keep 1 week at room temperature, 2 weeks in the freezer or frozen for 3 months.

Can you freeze pecan tassies?

My Great-Grandmother's pecan tassies freeze wonderfully. Package them in an airtight container layered between parchment or wax paper. They will keep up to 3 months. They also taste delicious frozen!

How do you thaw pecan tassies?

To thaw pecan tassies allow them to sit at room temperature in their container. There isn’t a lot of moisture, so they will not get soggy. If you are not convinced, you can thaw them uncovered. Just don’t be shocked when some disappear!

You can make as a large a batch as you wish of these pecan tassies. The most I have made was 500. I had to bake it in batches because I didn’t have enough pans. If making a large batch, I strongly suggest sprinkling the pecans into each crust before pouring in the filling. This ensures an even distribution.

Fill the pecan tassies using a liquid measuring cup with a pour spout. I find that this allows the best control. It minimizes the chance for drips and overfilling!

To make the Shells:

To make the Filling: 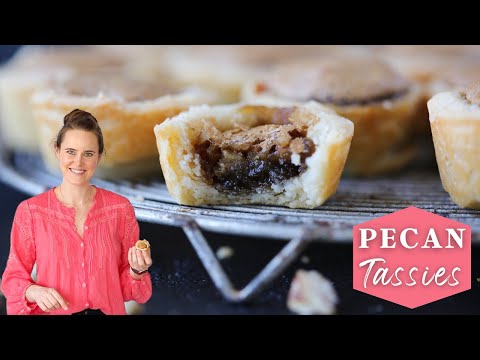 I never had the opportunity to watch RoRo make these tassies, so I had to read her card and do some experimentation. I like salted butter in the filling, but I doubt she used two different types of butter. You could use unsalted and then add a pinch of kosher salt to the filling instead. I used half as many pecans. I used the whole ⅔ cup in one test batch and I didn’t like them as much. Use to your taste!
Keyword christmas cookies, cookie recipe, hand pies, heirloom recipe, mini desserts, pecan recipes
Tried this recipe?Mention @cheflindseyfarr

Check out our other delicious, chef-developed recipes for Cookies!