This banana pudding is even better than Magnolia Bakery’s! Layers of lightened vanilla pudding, ‘Nilla wafers, and perfectly ripe bananas all meld together into one unforgettable dessert!

Banana pudding is one of those unexpected desserts where the result is greater than the sum of its parts! I was reluctant to try it for a long time. I didn’t love pudding, overly ripe bananas, or mushy cookies. No one was going to convince me that I should choose that over chocolate.

As a professional pastry chef, I am not proud to admit this, but it was the ‘Nilla wafers that made me try it. I love ‘Nilla wafers. Sure, I’ve made my own and they are delicious. However, there is something in that fake vanilla flavoring and the perfectly golden brown outside of Nabisco’s. And it's that something that just makes them so addicting!

Everyone knows that the gold standard is Magnolia Bakery’s banana pudding. It's no secret that I have stood in line just to get it. {Um, side note, did you try their limited edition carrot cake banana pudding? ?I die.}

Why is mine better, then? Great question. Easy answer: because I make my pudding from scratch. While I may love the fake flavoring of ‘Nilla wafers, I do not love pudding mix.

Making pudding the good-old-fashioned way on the stovetop from scratch may seem daunting, I am here to assure you that it is super easy!
So grab your whisks, and let’s do this!

Just a little PSA: when I make these for the restaurants, they sell out within the first hour! Prepare yourself for accolades, recipe requests and a lot of, “oh, just one more spoonful”!

I made the mistake of not giving away everything I made after filming my YouTube tutorial, and I “just one more spoonful”ed myself into eating an entire quart!

I am who I am, so I made my banana pudding in individual trifle glasses but you could also build it in a large bowl, deep baking dish, or ramekins! It is such an easy “set it and forget it” dessert to make ahead for a party, potluck, afterschool snack or weekday dessert! It is also a super fun deviation from the usual Valentine’s Day desserts! ? You heard it here first!

For the Vanilla Bean Pudding:

Make the Pudding (can be done several days in advance): 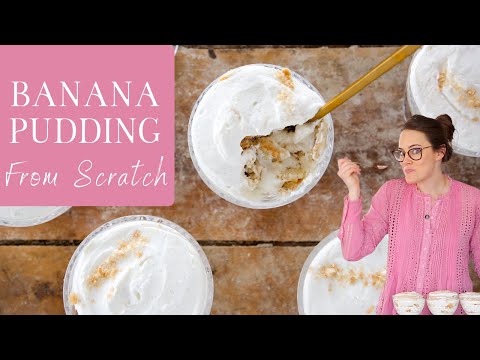