These Apple Hand Pies have a flaky crust filled with a homemade cinnamon apple filling! They are easy to pull together and faster to bake than pie. The perfect hand-held treat!

The only downside to a full apple pie is that they are time consuming projects. You could make apple cupcakes instead, but when the mood for pie strikes it cannot be denied! Apple hand pies eliminate most of that time and stress of full pies and are made in a fraction of the time. Craving satiated.

While you could eat it warmed up on-the-go, I prefer mine with a scoop of vanilla ice cream, a drizzle of caramel sauce, or a generous pour of vanilla bean anglaise.

How to make Apple Hand Pies with flakey crusts?

The importance of Gluten in Apple Hand Pies:

Let’s talk about gluten. The first 2 rules for Pie Crusts exist almost exclusively to control the amount of gluten formation. This is even important in individual pies not just large pies.

Why did my apple hand pies pop open in the oven?

To avoid all that stress, you could always use a shortening pie dough instead. The texture will be more crumbly rather than flakey.

Pre-cooking the filling is a must here. The little apple hand pies don’t cook long enough for the apples to soften and the flavors to meld. Cooking it on the stove top ensures a perfect texture in every bite! Be sure to cool the filling before assembling or you’ll undo all that hard work on your crusts. 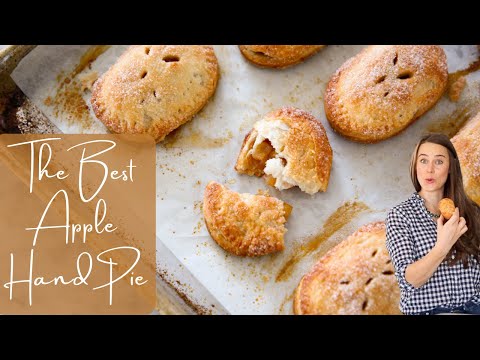